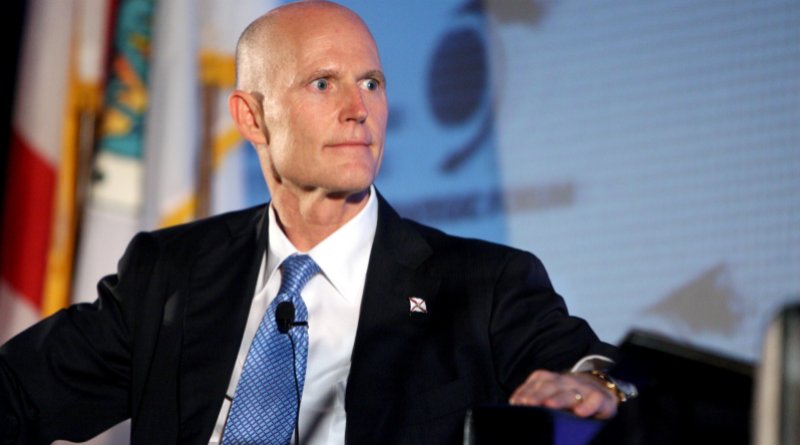 JIM SAUNDERS. . .Gov. Rick Scott and the Florida Cabinet on Wednesday continued battling a judge’s ruling that would require the state to overhaul the controversial process for restoring ex-felons’ voting rights, taking the case to a federal appeals court.

Attorney General Pam Bondi’s office filed a notice of appeal at the Atlanta-based 11th U.S. Circuit Court of Appeals. Also, it requested a stay of an order by U.S. District Judge Mark Walker that gave the state an April 26 deadline for making changes to the rights-restoration process.

Walker ruled that the current process is unconstitutional, in part, because it gives Scott and Cabinet members, serving as the state Board of Executive Clemency, “unfettered discretion” in deciding whether former felons should have their rights restored after completing sentences.

But in a 27-page motion Wednesday requesting the stay, attorneys in Bondi’s office hammered Walker’s ruling and defended the state’s authority to decide how to handle restoration of rights.

“(The) injunction in this case does not just prevent the state from effectuating state law,” the motion said. “It also directs four of the state’s highest-ranking executive officers to revamp a 150-year-old vote-restoration scheme in 30 days. A federal court order requiring state officials to come up with new state policies impinges on the sovereignty and autonomy of the state.”

Walker, in an order issued March 27 and in an earlier ruling, said the state was violating First Amendment rights and equal-protection rights of ex-felons. But the state’s attorneys wrote in Wednesday’s motion that Walker “relied on unsubstantiated insinuations of actual discrimination,” and they sought to dispel arguments that the restoration process is unconstitutional.

“In short, federal law, as authoritatively construed by the (U.S.) Supreme Court, affirmatively authorizes the state not to maintain any vote-restoration system; this (Walker’s) court may not instruct state officials on how to conform their conduct to state law; state law does not require the Board (of Executive Clemency) to come up with a new process for considering applications seeking restoration of civil rights; and, even if state law could be construed to require an active and ongoing process by which voting rights may be restored, such a process is already in place,” the motion said. “Thus, this court’s injunction improperly prevents the state from pursuing policy options consonant with federal and state law.”

Restoration of voting rights has long been a controversial legal and political issue in Florida. After taking office in 2011, Scott and Bondi played key roles in changing the process to effectively make it harder for felons to get their rights restored.

Under the current process, ex-felons must wait five or seven years after their sentences are complete to apply to have rights restored. After applications are filed, the process can take years to complete.

A political committee known as Floridians for a Fair Democracy has collected enough petition signatures to place a measure on the November general-election ballot that, if approved by voters, would automatically restore voting rights to felons who have served their sentences, completed parole or probation and paid restitution. Murderers and sex offenders would be excluded under the measure, which will appear on the ballot as Amendment 4.

“Stripping Floridians of their voting rights is a shameful policy with roots in the Jim Crow era,” Graham said in her statement. “If Rick Scott won’t act to restore voting rights, the people of Florida will do it for him this November — and, as governor, I will ensure the rights restoration amendment is fully implemented.”

But John Tupps, a spokesman for Scott, issued a statement that said state elected officials, not federal judges, should determine clemency policies.

“The governor will always stand with victims of crime,” Tupps said. “He believes that people who have been convicted of crimes like murder, violence against children and domestic violence, should demonstrate that they can live a life free of crime while being accountable to our communities.”

Walker’s March 27 ruling chastised Scott and other state officials and ordered the clemency board to devise a constitutionally sound program with “specific, neutral criteria that excise the risk — and, of course, the actual practice of — any impermissible discrimination, such as race, gender, religion or viewpoint.”

Walker did not specify a particular process but ordered that “Florida’s corrected scheme cannot be byzantine or burdensome.”

One thought on “State fights ruling on rights restoration”