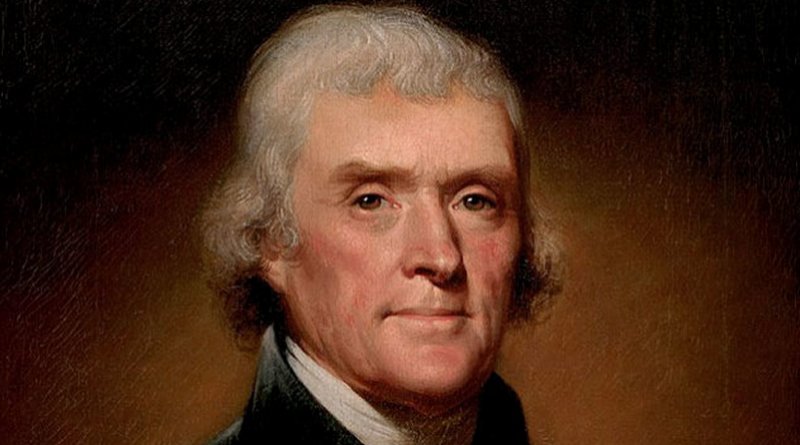 Well, not precisely. But, on this day 192 years ago, a sex offender passed away.

This was no common sex offender. In fact, he was more remarkable than most men who’ve ever lived. Governor of Virginia. Minister to France. First Secretary of State. Second Vice President. Third President of the United States. And, perhaps most importantly of all, the person responsible for writing the Declaration of Independence.

Yes, Thomas Jefferson was a sex offender. Or at least he would be.

Here are the relevant facts: Two years after the death of his wife, Martha, from complications with the birth of their sixth child—an event that profoundly affected the remainder of Jefferson’s life—Congress sent Jefferson to Paris to replace Benjamin Franklin as minister to France.

Jefferson took his oldest daughter Patsy with him. It was 1784, eight years after the fledgling nation declared independence from Great Britain and five years before the Constitutional Convention in Philadelphia.

Late in 1787, Jefferson received word about the passing of his youngest daughter, Lucy, and immediately sent for his other daughter, Mary, who had remained at Monticello near Charlottesville, Virginia. Sally Hemings, one of Jefferson’s slaves, was sent along with Mary to accompany her. Mary was 9. Sally was 14.

In the parlance of the time, Sally Hemings was a mulatto. Her mother was a slave. Her father, John Wayles, was a white owner of slaves. Sally became the property of Thomas Jefferson when Mr. Wayles died and his daughter, Martha, Jefferson’s wife, inherited the property.

Let me unpack that for you. Sally Hemings and Martha Jefferson were half sisters because they shared the same father.

By all accounts, Sally was a light-skinned woman whose features were exceptional. And in Martha’s passing, it is likely that Jefferson grew closer to Sally as a means to fill the void created by the tragic and untimely death of his young wife. We now know that Sally’s living quarters were adjacent to Jefferson’s bedroom.

Back to 1787: What history demonstrates as a matter of record is that Jefferson, then 44, called for his then youngest daughter to travel to France. Sally, then 14, came along with her. When Jefferson, his daughters, and Sally returned to Virginia in 1789, Sally was pregnant and gave birth to a son in early 1790. The son soon died.

Almost from the start there were rumors and innuendo about the unexplained pregnancy of Sally Hemings. But out of respect for Jefferson, and due to his ability to keep private things private in his own household (to whom Sally belonged as a thing of chattel), there was little attention paid to the matter from outside the vicinity of Monticello.

That changed in a dramatic way after the bitter presidential election of 1800. James Calendar, a political pamphleteer, had assisted in Jefferson’s effort to secure the White House (which was more commonly known as the “Pink Palace” in those days) by penning scurrilous attacks on Jefferson’s main rival, and the incumbent president, John Adams.

When the campaign ended and Jefferson finally secured victory (after the Republican House of Representatives voted to decide the tie between Jefferson and Aaron Burr), Mr. Calendar wanted a pay off. He wanted Jefferson to give him a job as a Postmaster. Jefferson refused. So Calendar went looking for dirt on Jefferson. Turns out, he didn’t have much digging to do. He just went to Monticello and starting asking questions.

For more than 150 years, the Jefferson family successfully maintained a narrative that freed Thomas Jefferson from having to own any paternal responsibility for Sally Hemings’ seven children. And even when the story was recycled, the main emphasis was always that Jefferson had fathered mixed-race children and was therefore miscegenous. Never once was he alleged to have sexually abused a teenager who was entrusted to his care as a substitute father.

And yet, even still, I don’t think I’ve ever seen the charge of “pedophile” or “child abuser” or “child rapist” leveled directly at Thomas Jefferson. And while I respect the man’s contributions to our nation’s independence and founding generation (truly, Jefferson is a giant among giants), there is something discomfiting about the way his life and legacy escapes the obsessive, sex offender lunacy of our present generation.

Let us consider, for example, what happens to a 45-year-old man today who is discovered to have fathered a child with a 15-year-old girl, especially a girl to whom he is responsible for providing sustenance and care. Can there be any doubt that Thomas Jefferson would be charged with a sexual crime, and most likely several?

And what of his life, his talents, and his contributions to American history? Erase Thomas Jefferson’s importance to the celebrations of this day and imagine how different things might actually be. Who could understand an American history without the word inalienable? Without the phrase All men are created equal? Without the Louisiana Purchase? Without Lewis and Clark?

The significance of each of them is wrapped eternally into the significance of a single person who intersected time and space for what many have regarded as a divine task. We might even say that God ordained it.

While no one who acknowledges the existence of God believes that he condones, let alone ordains, sexual immorality, maybe the story of Thomas Jefferson is teaching us another lesson, one that we so desperately need. Maybe what we see in Jefferson is the capacity of great sinners to coexist with great saints, and often in the exact same body.