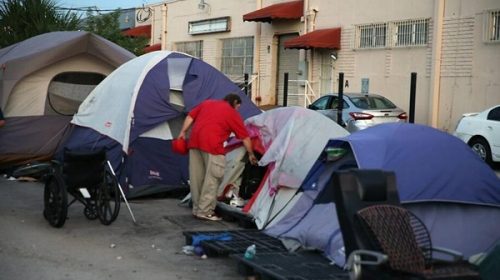 By STEVE YODER . . . A few miles from Miami International Airport, outside of Hialeah, sits a tent camp of about 280 homeless people. There’s no electricity or running water and no bathrooms. News reports describe the stench of human waste and garbage, tents that flood when it rains, and flies, mosquitoes, and rats infesting the area. “Animals live better than this,” one resident told a reporter.

He and the others there are on the state sex offender registry. Miami-Dade County laws make it almost impossible for them to find places to live and bar homeless shelters from taking them in. For many registrants, the encampment has been a last resort, but in January, county leaders passed a new rule that makes them subject to arrest if they don’t find housing by May 7.

The person most responsible for the camp’s existence may be state lobbyist Ron Book. In 1996, he and his wife hired Waldina Flores as a nanny for their three children in their home outside Fort Lauderdale. Over the course of six years, Flores sexually and physically abused their oldest child, Lauren. Lauren Book eventually told a psychiatrist, and Flores was arrested and ultimately sentenced to 25 years in prison.

Lauren Book went on to found a nonprofit that promotes sexual abuse prevention, of which Ron Book is the chair; Lauren is now a Florida state senator. But Ron Book also lobbied for new laws. In 2005, he helped convince Miami Beach to pass an ordinance that bans people on sex offender registries from living within 2,500 feet of a school, a rule later adopted countywide. State legislators earlier had passed a law barring registrants from living within 1,000 feet of day care centers, parks, playgrounds, and schools.

In combination, those policies left only tiny patches where Miami-Dade registrants could live. By 2007, news reports were describing people with sex-crime records living under the Julia Tuttle Causeway, some literally dropped off there by their probation officers. In 2010, a spate of negative news stories forced the county to shut down that encampment.

Book has been at the center of this debate for years, as both an advocate for the restrictions and as chair of the Miami-Dade County Homeless Trust, the lead body for implementing county plans for solving homelessness. After the Julia Tuttle camp closure, he used the proceeds of local food and beverage taxes to find short-term housing in a trailer park and hotels for some of the homeless people. But when that money ran out and the the trailer park was found to be too close to a school, the registrants were out on the streets again. In March 2014, the Miami New Times reported that 57 men were living at the Hialeah encampment, and its numbers have since more than quadrupled.

A 2013 study in the journal Criminal Justice Policy Review found that only 4 percent of Miami-Dade county residences were outside a ban zone, and only 1 percent of legal residences rented for $1,250 a month or less. Registrants in the county are more than 50 times as likely as those in the general population to be homeless, the researchers found. Many of the people living in the encampment have family members who would take them in, but their homes are off-limits, says Jeanne Baker, legal panel chair of the ACLU’s greater Miami chapter.

Read the rest of Steve’s article here at In Justice Today.

I have a voice