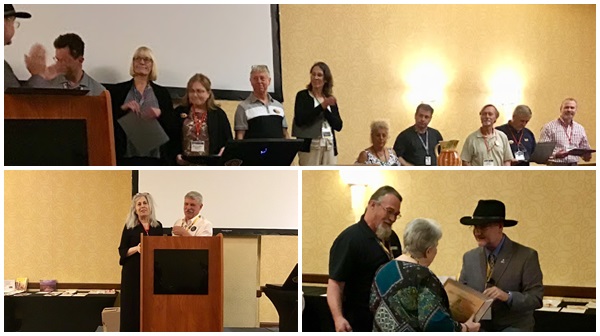 By Robin and Sandy . . . One of the highlights among so many at NARSOL’s annual conference is the banquet and awards ceremony.

NARSOL initiated the awards in 2015 with two awards. The Braveheart Award recognizes a person outside of NARSOL who does something, normally in the course of his or her work, that is consistent with our mission and supports and furthers our advocacy. Lenore Skenazy was our very first recipient; her overall goal is to encourage us to live our lives based on the rational rather than the irrational, and she is very outspoken that the registry is based on the irrational.

The second initially created award recognizes someone within the NARSOL family who has performed in an outstanding way during the previous year toward advancing our advocacy, and our first recipient, Mary Sue Molnar, founder and president of our Texas affiliate organization Texas Voices for Reason and Justice, fits that definition to a “T” and was our choice for our first Advocate of the Year Award.

This year the Braveheart Award was awarded to the Attorney General of Michigan, Dana Nessel, for the contribution of her amicus briefs in Michigan v. Snyder and People v. Betts, cases arguing that Michigan’s sex offender registration and notification requirements are punishment because they are so burdensome and fail to distinguish between dangerous offenders and those who are not a threat to the community.

The 2019 Advocate of the Year Award went to Cindy Prizio, the founder and ED of our Connecticut affiliate organization One Standard of Justice. Cindy and the organization have, in a very few years, made remarkable strides in furthering the mission and goal of NARSOL both legislatively and educationally, even hosting their own successful conference in May of this year.

A third award, the Hawthorne, was established in 2018 and recognizes someone who has contributed ten thousand dollars either financially or in work and time toward advancing the mission and goals of NARSOL. This year’s Hawthorne was awarded to attorneys Adele Nicholas and Mark Weinberg for their litigation work in, primarily, Illinois in conjunction with Illinois Voices, our affiliate organization in that state.

Created in 2017, the Pearl award recognizes NARSOL members and volunteers who have gone above and beyond in their service on behalf of the organization and the people for whom we advocate. A significant number of Pearls were given this year.

The most prestigious award, created in 2016, is our Lifetime Achievement Award. This award is not automatically bestowed yearly but only in years in which a deserving candidate has emerged. The very first recipient was the man known to all of us for many, many years as E-Advocate. Robin Vanderwall, NARSOL’s vice-chair and 2019 master of ceremonies, announced this year that the Awards Committee has revised the name of the award to the Paul E. Shannon Lifetime Achievement Award in honor of our organization’s founder and current chair, who himself was a recipient of it in 2017.

The newly renamed Paul E. Shannon Lifetime Achievement Award was presented this year to Sandy Rozek, NARSOL’s secretary, communications director, and Digest editor, who has served on the NARSOL board for many years.