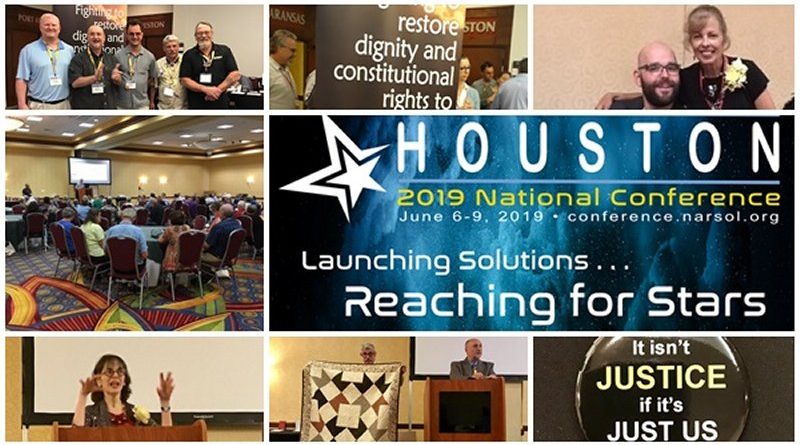 By Sandy . . . As I write this, I have been home less than ten minutes after the conclusion of our Houston conference, our eleventh.

It has been a most incredible experience.

We have been honored to extend ten scholarship grants to persons who otherwise would not have been able to attend, persons who qualified under the requirements set by the board and were eligible to receive not only free conference registration but a cash allotment to help offset their travel and lodging expenses. This is the 3rd year that NARSOL has offered this program. Additionally, a significant number of others received a waiver of registration fees.

Our overall attendance broke all previous conference records at just over 200, making Houston our largest conference to date.

Also making this conference special was the honor that the office of the mayor of the city, Sylvester Turner, extended to NARSOL in the way of an official letter welcoming us to Houston.

There were so many highlights worth noting that I’m almost reluctant to mention any, knowing that I will omit someone or something I should not have.

Certainly the bright starts were attorney Paul Dubbeling with his message of effective legal and advocacy strategy that emphasizes facts, truth, and persistence; Guy-Hamilton Smith and David Mensah with their messages of effective personal story-telling – without which the facts may never have an impact; and Lenore Skenazy with her absolute, unquenchable enthusiasm and ebullience and her message of living our lives based on the rational rather than the irrational.

The crowning highlight was our now traditional banquet and awards ceremony held Saturday evening. The service was flawless, the food delicious, and the master of ceremony, NARSOL’s vice-chair Robin Vanderwall, charming and witty. Lenore, in her speech, took us back to her beginning involvement with our advocacy and how she very early recognized the sexual offense registry and all that it has spawned as another example of what she calls “worst first thinking,” which is, in any situation, imagining the worst possible outcome there could be and then proceeding as though that thing were virtually sure to happen.

A significant number of Pearl awards were given to NARSOL members and volunteers who have made significant contributions through the year to the advocacy. Our yearly Braveheart Award went to Dana Nessel and was accepted by our advocates in Michigan. Connecticut affiliate leader Cindy Prizio was awarded the well-deserved Advocate of the Year Award for her unfailing and tireless fight on behalf of registered citizens.

The silent auction, quilt raffle, and 50-50 raffle were great fun.

Anticipation for this conference has been building for weeks, even months. Now it is over, leaving in its wake exhaustion, gratitude, and an overwhelming sense of pride and accomplishment. Those attendees who are willing, please take a few minutes to write a paragraph about your conference experience and impressions and send to communications@narsol.org. If you would like, include a head-shot of yourself. We have already started planning for next year’s conference in Raleigh, North Carolina, and these will be used as part of our promotional materials.

From the bottom of our hearts, thank you to all who attended.