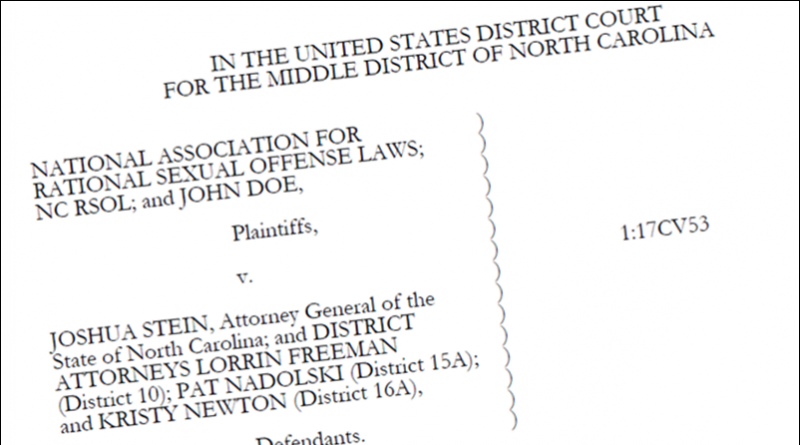 By ROBIN . . . On January 23, 2017, the National Association for Rational Sexual Offense Laws (NARSOL) and its affiliate in North Carolina (NCRSOL), along with two John Doe plaintiffs, filed an 88-page complaint in the U.S. Federal Court for the Middle District of North Carolina. The complaint alleged various constitutional claims concerning Article 27A (sex offender registry scheme) of the N.C. General Statutes. The case (NARSOL v. Stein) was assigned to Judge Loretta Copeland Biggs, who presided at a hearing on April 16, 2018, to consider the state’s motion to dismiss the complaint.

On May 30, 2018, Judge Biggs ordered the plaintiffs to submit a more definite statement clearly identifying the factual allegations that support each claim for relief, the specific statutory provision(s) of which plaintiffs complain, and the specific claim(s) alleged against each defendant named in the complaint.

In response, on July 6, 2018, plaintiffs’ attorney removed certain allegations of constitutional harm contained in the original complaint and filed them as a new case in the Federal District Court for the Middle District of North Carolina. That case (styled NCRSOL v. Stein) is currently before Judge William Lindsay Osteen, Jr.

On the same day, plaintiffs’ attorney filed an amended complaint that left in place all the underlying facts and legal arguments presented as Ex Post Facto claims in the original complaint.

Then we heard birds chirping by day and crickets chirping by night for more than a year. From time to time, someone would send an email or post a comment inquiring about the status of the North Carolina cases. The state got so bored it replaced its attorney. There was much wringing of hands and chattering of teeth.

Finally, on July 30, 2019, we got some long awaited and positively good news. The state’s motion to dismiss was denied. So now the hard work begins. The case moves into the discovery phase in preparation for trial.

The state’s motion to dismiss relied, as expected, primarily upon some important procedural rules included in the Federal Rules of Civil Procedure (FRCP), specifically Rule 12(b)(1), Rule 12(b)(2), and Rule 12(b)(6). So what are these rules?

Yes, this is going to sound a lot like legal mumbo jumbo. If this frustrates you, then stop reading right here! You’ve been fairly warned.

Rule 12(b)(1) states that a defendant may move a federal court to dismiss a plaintiff’s claim on the basis that the court lacks subject matter jurisdiction. In other words, the court can’t really “hear” the claim because it doesn’t have any authority over the matter being presented for consideration. This is where you may have heard it said that a plaintiff lacks standing to sue.

It is under Rule 12(b)(1) where attorneys representing the state usually include an Eleventh Amendment defense, as well. It normally comes in several forms ranging from, “The federal courts should defer to the state’s understanding of its own regulatory laws,” to, “The federal courts should not intervene in a legal dispute where there has been no fair adjudication of the matter by state-level courts,” to “The state’s statute of limitations precludes a federal court from considering a legal challenge that exceeds the time bar imposed by state law.” In most of these cases, the federal courts will often agree. But, when it comes to claims against state laws that are alleged to be unconstitutional, federal courts are duty bound to consider a challenge which alleges an ongoing violation of federal law.

Rule 12(b)(2) states that a defendant may move a federal court to dismiss a plaintiff’s claim on the basis that the court lacks personal jurisdiction. In other words, no matter what the claim is and no matter whether the court could actually “hear” the claim, the court doesn’t have any authority to enforce a judgment against the people who are named as defendants in the lawsuit. Sometimes you will hear this spoken about as immunity.

So what is a “cognizable claim”? A cognizable claim is one that meets the basic criteria of viability for being tried or adjudicated before a federal court and is also within the power or jurisdiction of the court to adjudicate. Simply put, your complaint has to present a claim that the court has the constitutional authority to “hear.”

What are articulated facts? These are really the most important things to demonstrate, and they are also what are most lacking, many times, in efforts to bring serious constitutional claims on behalf of the registered population. Put simply, it is not enough to say, “This is unfair,” or, “I feel bad,” or, “I don’t understand how they could do this,” because these are not articulated facts of anything. They are merely conjectural statements about feelings.

An articulated (well stated) fact looks something like this:

Plaintiff, a registered sex offender, states that he had a well-paying job with full medical benefits while working for his former employer. The state then passed a law restricting anyone on the sex offender registry from working within 300 feet of any facility where children are schooled, instructed, or cared for. As a consequence, plaintiff lost his job and his medical insurance. He is now unemployed and recently discovered he suffers from hypertension. But for the effects caused by the state’s new law, plaintiff would still have lucrative employment and the necessary insurance to seek the medical care he needs.

There’s nothing there about feelings or fairness or conjectural harm. The harm is real, the causation is obvious, and the facts are “articulated.”

You probably expected that I might spend more time explaining the state’s motion to dismiss in the NARSOL v. Stein case and walk you through the reasons why the Court saw fit to deny it. But instead, I’ve decided to write something a bit more instructional as a guide to assist you in reading through the Court’s decision to deny the state’s motion. You will understand the process—and the Court’s reasoning—a lot better if you take the time to read Judge Biggs’ Memorandum Opinion and Order.

Otherwise, the good news is that the NARSOL v. Stein case will now move forward into the most critical phase of its development, discovery. This is where we will have an opportunity to further develop the facts, provide additional statistical support, interview possible witnesses (including expert witnesses), and frustrate the state’s efforts at preparing for battle. It should be great fun!

And thank you for your patience! “The night may seem long, but it is the part of fidelity to watch and wait for the morning” (Jeff Davis, 1866).