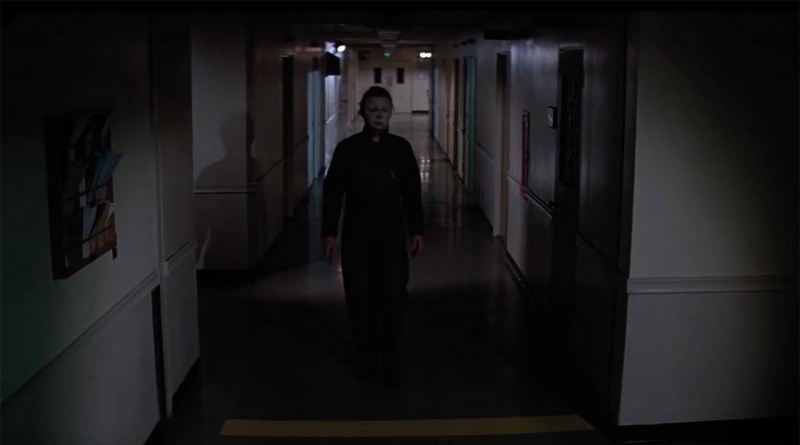 Do you believe in the boogeyman?

This is the pivotal question of the Halloween movie franchise. The tension around naming the movies’ antagonist foregrounds the problem of seeing him: “it” or “him,” “thing” or “human,” “The Shape” or “Michael Myers”? Even if you have never seen the original 1978 movie, you know the plot. On Halloween 1963, six-year-old Michael Myers kills his older sister after she has sex with her boyfriend. Cut to 1978, and Myers, after being locked in an asylum for fifteen years, escapes back into the neighborhood to repeat his crime on teenagers who, like his sister, use the freedom of babysitting to have sex with their boyfriends. Myers’s brutality answers the sexuality of these young women. The story is a morality tale embedded within a coming-of-age story: enjoying themselves as sexual beings without heeding the dangers costs the girls their lives. Only the heroine, Laurie Strode (Jamie Lee Curtis), bookish and virginal, is able to defy Myers, fending him off with a knitting needle and a coat hanger, domestic objects that reinforce her identity as both a good babysitter and a virtuous girl.

Halloween ignited the 1980s craze for slashers, a film genre that centers on the violent murder of sexually active teenagers, and especially young women. These films clearly tapped into the Zeitgeist, as the decade also is remembered for its frantic anxieties about an ostensibly real danger: the sexual predator, who lurked in every school, summer camp, rural town, and suburban subdivision—anywhere children might congregate away from protective parents. Myers perfected the figure of the sex offender: he lives inconspicuously in the community, he is the boy next door gone inexplicably wrong. His doctor’s diagnosis? That he is “purely, simply evil.” He is the boogeyman, and he has always haunted our imaginations.

Halloween played on fears about adults who harm children. Halloween is, in some sense, a holiday about this fear, when we struggle to define our own humanity by feeling around its edges. In the 1960s, the media reported on a rash of booby-trapped apples, a premise straight out of a fairytale. Those of us who grew up in the ’70s and ’80s had Halloweens filled with tales of poisoned, LSD-enhanced, cyanide-laced, and razor blade–spiked candies. We thought it was a prank, a bit of folklore to shore up the occult mood, but our parents—and hospitals, too—took it seriously. We brought our candy to the local ER to be x-rayed for free or else our parents made us break each and every piece in half before eating any. A few years ago, as the evil clown hysteria peaked just before Halloween, rumors about clown-abducted or killed children led some parents to arm themselves or cancel trick-or-treating altogether.

Who exactly did we think was doing these things?

The boogeyman my generation was raised to fear had two slightly different but related manifestations. He was, in some instances, the boogeyman we only thought we knew—our neighbor, our doctor, our teacher, our coach. In this incarnation, he is indistinguishable from a dad—he might even be our dad, as he was for Laura Palmer on Twin Peaks, David Lynch’s 1990 show that dramatized the fears of an era. This boogeyman’s danger lies in his familiarity; maybe we’ve said “hi” to him in the parking lot; we could have easily encountered him mowing his lawn or playing with the neighbor’s dog. And as statistics show, fear of this boogeyman is not ungrounded: as of 2000, 97 percent of child sexual abuse was committed by adults whom the victim knows well.

But the incarnation of the boogeyman that we feared even more was the statistically improbable one: the true stranger, the one who lurks waiting for nightfall or for you to separate from your friends. The children’s section of the library, the bus stop, the playground, the shortcut through a corn field, the empty lot on the way home from school are the places this “monster” preys.

Fear of real-life boogeymen led to the passage of a spate of laws in the 1980s and ’90s, almost all named after a disappeared or murdered child, all white and middle-class. Their whiteness helped make the crimes against them into national spectacles. In Atlanta during the same era, two dozen black children were murdered but the story did not make national headlines until ten children were already dead or missing. Zero new laws were passed in the aftermath. In response to the violations of white children, by contrast, laws and protocols such as the Jacob Wetterling Crimes Against Children and Sexually Violent Offender Registry Act, Megan’s Law, the Adam Walsh Child Protection and Safety Act, Chelsea’s Law, Amber Alert, and Jessica’s Law aimed to protect children from dangerous strangers.

The national “stranger danger” campaign—and the Halloween franchise, with its monster who escaped from an asylum—came, not incidentally, on the heels of a deinstitutionalization movement that a decade prior had freed juvenile offenders and mentally ill patients, placing them in community-based care facilities. As public policy, deinstitutionalization began with John F. Kennedy’s Community Mental Health Centers Act of 1963, which aimed at combating abuse, neglect, and misdiagnoses in asylums, and was sustained by the invention of psychotropic drugs. The massive influx of former asylum patients into established communities, however, without proper infrastructure or public education, stirred up distress and stigmatization. As a commentary on the deinstitutionalization movement, Halloween proposes that mental illness is akin to criminality, and specifically sexual predation.

These fears remain with us to this day. And they are codified in draconian and almost certainly unconstitutional laws, as Judith Levine has explored for Boston Review. Sex offender laws and registries all but guarantee that convicted sex offenders are, for the remainder of their lives, unable to rejoin normal human society after serving their sentences. Laws dictate where they can live and work, ensuring that they remain strangers—no matter what offense they committed, no matter if they lack a sexual or violent history with children, no matter that such laws have been proven ineffective at stopping future offense.

Just as fears about malevolent strangers peak during Halloween, so do laws controlling convicted sex offenders. Throughout the United States, there are myriad state-, county-, and municipal-level procedures for sex offenders on Halloween, some of which have been on the books since the 1990s. Concerned that these local ordinances were insufficient, Illinois codified Halloween restrictions in 2005, followed by California, Delaware, Florida, Georgia, Louisiana, Missouri, New York, Nevada, North Carolina, Ohio, Tennessee, Texas, Wisconsin, and Wyoming. Laws and statutes sometimes target all registered sex offenders and sometimes only paroled sex offenders. Under California’s “Operation Boo,” police and parole office sweeps enforce strict state-wide curfews and round up homeless or transient sex offenders for the night. If a registrant forgets to update a phone number with their parole officer, a Halloween night home visit might lead to a felony charge. Some so-called “No Candy” laws force convicted offenders to post state-generated “No candy, no treats” signs on their front doors. Others make it illegal for them to drive after dark on Halloween; decorate their homes, inside or out, for Halloween; host parties in their homes on that night; answer their door between 5:00 and 10:00 p.m.; or even have their porch lights on or curtains open. Laws prevent them from going on hayrides or going into haunted houses or corn mazes. They cannot dress as a cop. They cannot put on a doctor or clergy costume. They cannot dress as Santa. They cannot dress as Captain Kirk. They cannot dress as Michael Myers. They cannot dress as a clown or a monster. They cannot wear any mask or costume because we understand the sex offender as someone already wearing one.

Yet sex crimes do not spike on Halloween, and “stranger danger” is a largely mythical threat. Almost all sex crimes committed by strangers on Halloween are committed by first time offenders. In fact, registered sex offenders are rarely repeat offenders; the only offense with a lower recidivism rate is murder. And in 2008, Department of Justice research indicated that Megan’s Law has had no measurable effect on recidivism. Children are far more likely to be struck by a car on Halloween than be assaulted. In fact, children are ten times likelier to be struck by a car on Halloween than on any other day. The dangers on Halloween are far more familiar and domestic than we like to believe, like the cases of five-year-old Kevin Totson, who supposedly died from heroin-sprinkled candy but was actually poisoned by his uncle’s supply, or eight-year-old Timothy O’Bryan, whose cyanide-laced pixie stick was given to him by his father who had just taken out a life insurance policy on the child. In other words, these laws are simply punitive. They prevent nothing.

Who is the monster now?

The Sex Offender Registry is an industry worth billions of dollars. It turns people into commodities. It turns doing time into a life sentence. And it turns horror movies and urban legends into laws we believe in. Thanks to it, we can browse online the names, addresses, and faces of sex offenders in any neighborhood—information that can be used however people wish, as when Good Housekeeping published links to each state’s lists to help parents prepare for Halloween a few years ago. Some of the people on this list have done appalling things, to be sure, but we gain nothing by treating them all as boogeymen, as something akin to “purely, simply evil.” What we do is worsen their marginalization and relieve lawmakers from looking closely at the failure of the criminal justice system to handle any form of sexual assault.

Then that old refrain: But what about the children?

So often we fear the wrong things. And then make laws that theatricalize safety while amplifying our vulnerability. These laws fictionalize danger and then stage protection, something like Trump’s wall. We think we can make borders anywhere we feel threatened, but in doing so, we end up more barbaric than those we fear. Meanwhile “No Candy” laws and the like make us less safe, validating public panic instead of educating us about bona fide dangers. They also prevent former offenders from rebuilding their lives and safely rejoining their communities. And perhaps worst of all, they protect the sex offenders who don’t look like what we think sex offenders look like—the ones we know, whom we invite into our lives, live and work with, and perhaps love.