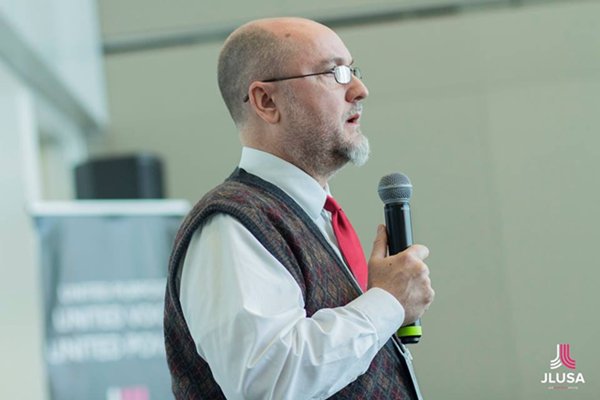 NCRSOL is proud to announce that its president, Robin W. Vander Wall, has been selected to serve as a Fellow in the 2018 Cohort of JustLeadershipUSA’s Leading with Conviction program.

Each year, JustLeadershipUSA (JLUSA) identifies effective and successful advocate leaders throughout the United States and invites them to apply for acceptance into a Cohort of formerly incarcerated individuals in order to participate in a year-long program of training and instruction intended to enhance their skill and capacity to lead others in the movement to drastically reduce our nation’s addiction to prisons.

JLUSA focuses exclusively on leaders who are already engaged in impactful criminal justice advocacy work and who have demonstrated the potential to become more successful reform advocates through exposure to training, new networks of reform, and additional resources from which to draw strength and endurance for the battles ahead.

Robin traveled to New York City in mid-January for the first of four intensive training sessions facilitated by David K. Mensah of DKBWAVE Training and Consulting, an organization that provides leadership training and executive coaching to for-profit and non-profit corporations throughout the United States.

“It was an incredible experience, and I’m still trying to get my head around it. I’m enthused about what JLUSA is attempting to achieve, and I am really thrilled that its leaders understand the importance of including registered citizens in the work of reforming our nation’s burgeoning prison problem,” Robin said.

“It’s really important for everyone to know that I was among friends who understand the terrible harm caused by sex offender registries. These people get it! They want the same thing we want: An end to unreasonable punishment and an opportunity for full and complete restoration of citizens into their communities. I am proud to be included in JLUSA’s 2018 Cohort of leaders.”

Robin W. Vander Wall was active as a campaign manager and consultant on a number of competitive municipal, state, and federal level campaigns prior to his arrest in 2003. At the time of his arrest, Robin was a third-year law student at Regent University School of Law in Virginia Beach and was scheduled to receive joint degrees in Law (J.D.) and Political Management (M.A.) the following Spring. He holds a B.A. in Political Science from The Citadel. From 1993 to 1997, Robin was president and publisher of The Citizen, a weekly tabloid on politics and culture published in Raleigh, NC. Since 2009, Robin has devoted much of his time as an advocate for citizens required to register as sex offenders. He presently serves as vice-chair for NARSOL and is the founder and president of NARSOL’s coordinating foundation, Vivante Espero.