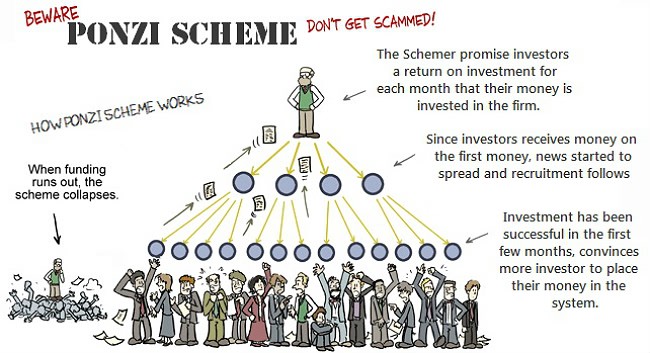 DWAYNE DAUGHTRY — Ponzi schemes are investment strategies where individuals help facilitate other like-minded individuals by purchasing or acquiring an idea or product with the hopes of an economic safety and security outcomes. These elaborate schemes take time to manifest and mature. Those that refuse or suspicious are usually labeled as missing an opportunity of a lifetime or misanthropic. Once the moment of collapse of Ponzi schemes unravels then does the distrust of those that invested harming families, security, public trust, and overall accountability.

The most massive Ponzi scheme that America has been selling for decades is the sex offender registry. It too has a pyramid scheme that allows investment in public policy and administrative oversight. Individuals such as John Walsh have raked in over $42M for his charities and amassed a net worth of $20M. States receive over $200M annually from the Edward R. Byrne grant program that helps fund offender registries nationwide. All while Walsh increases his rhetoric and scare tactics to increase funding and additional non-compliance penalties, states are struggling to keep up the pace where jails are beginning to fill up because of Ponzi styled policies backed by law enforcement agencies seeking to cash in on the opportunity.

All while sex offenses appeared to decrease overall, the recent #metoo and #timesup movement helped contribute the Ponzi effects by rescinding statute of limitation policies to dig some thirty plus years in the past adding to what appeared to be a stabilized registry. High profile additions have created the registry as a method to keep registry legislation, and pyramid schemes are breathing another sigh of relief that funding will indeed increase. While others are warning of the critical effects and possible backlash, the registry grows wildly into a mishmash of anyone easily or conveniently targeted.

But will the sex offender Ponzi scheme find itself on the brink of collapse? Many states are seeking registered offender to pay an annual fee to keep the registry requirements relevant all while continuing to acquire millions in government grants intended to pay for those that cannot contribute. It is usually Ponzi schemes that begin asking for investors to invest more or seeking undisclosed payments similar to what states are introducing to registrants. Citizens are starting to ask questions about the overall effectiveness of the registry and if it has gotten out of hand. The same similarities were asked by those wary of Bernie Madoff but went ignored for over a decade. Eventually, the world came crashing down around those that invested or supported Ponzi or pyramid schemes. It was ordinary folk and families that were ultimately destroyed by the cause and effects.

In general, the sex offender registry is nothing more than an elaborate and complicated Ponzi scheme. It promises an immediate return on investment by providing a secure community and added protections to educating those that choose to access it. In the past decades, it has produced no such reliability nor has an outlook that provides security at all. States continually add to the already convoluted and confusing laws or policies introduced, struck down, or amended on a quarterly basis leaving those affected by the registry entirely in the dark and vulnerable. This not a sign of an adequate return on investment. It is a sign that Americans have been duped out of billions of dollars at a failed experiment. It sounds more like a FEMA recovery plan for Puerto Rico with similarities of homelessness, hunger, no work, and a bleak outlook for the future.