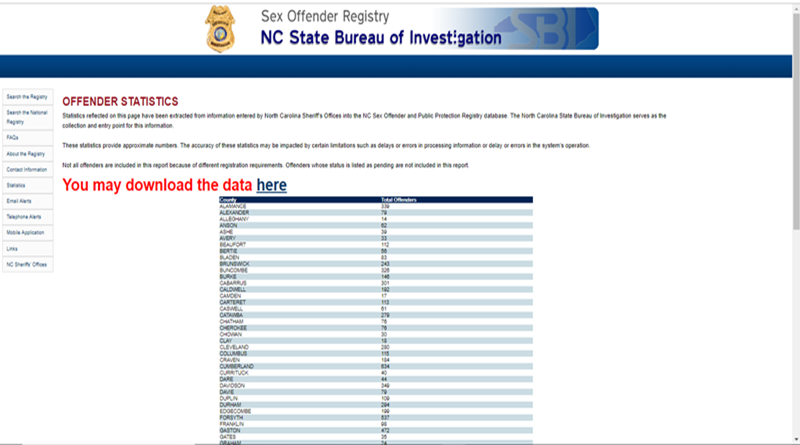 By CAMMIE BELLAMY . . . Sexual abuse against children has come under a laser focus in the Wilmington area this year, following the conviction of a former teacher and investigations into a local school district.

After Kelly serves his time in prison — between 17.6 and 31.8 years — he will be required to register as a sex offender for the next 30 years. A StarNews review of state data found that offenses against children are the most common convictions for sex offenders who live in the area.

Each year, the StarNews compiles mugshots of sex offenders for every ZIP code in New Hanover, Brunswick and Pender counties. Those images, as well as addresses and other information about offenders, are publicly available via the N.C. Sex Offender Registry.

Who ends up on the registry?

North Carolina established its registry in 1996, two years after Congress created the first federal law governing sex offender registration. In 1996, it updated the rules with Megan’s Law, mandating public disclosure of information about sex offenders to protect the public.

To end up on North Carolina’s registry, you must be convicted of a sexually violent offense or offense against a minor.

Among the 611 people in New Hanover, Brunswick and Pender counties on the N.C. Sex Offender Registry, a significant number were convicted for crimes against minors. The numbers represent total local convictions; an individual offender may have multiple convictions:

Of the 611 offenders who live in the Wilmington tri-county area, a sizeable proportion were convicted of crimes against children.

A breakdown of the data shows those 611 offenders were registered for 672 separate offenses (people convicted for multiple offenses may appear on the list several times). Of those, 150 were convicted outside of North Carolina.

But on the list of convictions for offenders convicted in-state, “indecent liberties with a minor” appears 289 times. The second-most common conviction on the list is sexual battery, appearing 44 times.

Of the 522 convictions local offenders racked up in-state, 360 were for crimes against a minor — more than two-thirds of the offenses.

Amy Feath, director of the Carousel Center in Wilmington, said when an instance of child sexual abuse receives press, the public often immediately brands the perpetrator a pedophile. But the causes of child sexual abuse, she said, often have more to do with the power structures that allowed the offender — be they a guardian, a teacher, or a coach — to victimize that child.

While pedophilia is a specific psychological diagnosis, an abuser needs just three things to offend: the motivation or desire to commit a crime, an opportunity, and a vulnerable victim.

“Any kind of sexual crime is generally not about the sex act, it is simply the degradation and the power and control issue,” Feath said. “In every society, the most vulnerable pieces of your society are going to be your youngest and your oldest.”

Where can offenders live?

State statute also mandates that any person on the registry not live within 1,000 feet of a school. But that restriction only applies to people convicted after August 2006.

That means many sex offenders registered in the Wilmington area would be exempt. Those include a man registered on Chestnut Street, convicted in 2002 of indecent liberties with a minor, who lives roughly 500 feet from New Hanover High School.

Offenders who committed crimes against children are not allowed to visit places where children frequently congregate, like certain libraries and parks, when children are present. But the state does not have a residency restriction for those types of places, meaning offenders can live any distance from them. A cursory search of the sex offender registry located a handful of offenders living within steps of Ogden Park, Greenfield Lake, Legion Stadium and Brunswick Nature Park.

In the vast majority of cases, offenders are located well away from schools are parks, and the residency restrictions can even make it difficult for some to find housing. The registry shows instances of multiple offenders living in a single home in the Wilmington area, or registering a hotel room as their official address.

Feath cautioned that the old “Stranger Danger” mentality, that teaches children to be wary of adults they don’t know, doesn’t help children identify signs of abuse from trusted adults.

How should we use it?

As Feath said, the registry should not be used as a tool to harass or persecute offenders. It it another source of information with which community members can arm themselves.

She would like to see children encouraged to use the proper names for body parts, and to trust their intuition in situations that might make them uncomfortable. Feath said she’s encouraged by the work New Hanover County’s Board of Education is doing to hire a coordinator to focus on sexual assault and harassment, and to rewrite district policy. She is also a member of the district’s Title IX committee, established this year in the wake of the Kelly case.

One of the most important issues to address, she said, is state mandatory reporting laws. Those are the laws that require people to report suspected child abuse, and include specific reporting protocol for medical professionals and educators.

“It takes a village to keep our kids safe,” Feath said. “You’re fulfilling your part of the contract by reporting.”