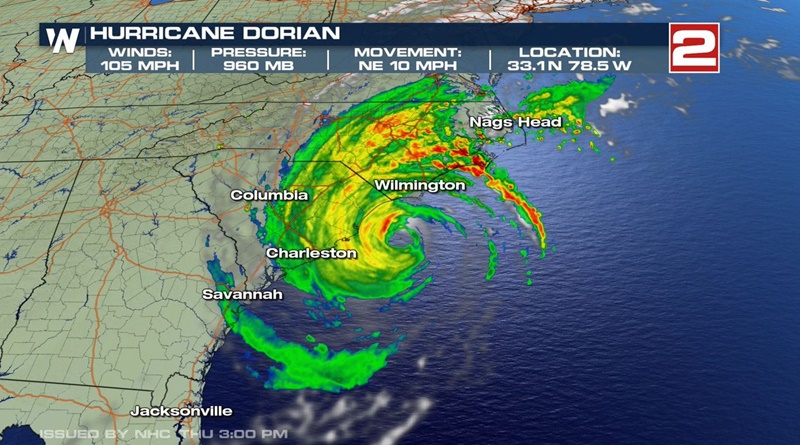 Under a low-hanging gray sky Wednesday morning, Randy Evans dished out eggs and doled out biscuits to about two dozen unsheltered people under a pavilion near the foot of Market Street in downtown Wilmington.

As people sat down to eat at the pavilion’s square wooden tables, conversations inevitably turned to the gradual approach of Hurricane Dorian, just as they did over breakfasts across this port city. One man, who did not want to be identified, told Evans he didn’t want to go to a pet-friendly shelter because his dog would get too stressed out in that environment.

Evans, the founder of advocacy group Walking Tall Wilmington, said, “They’re survivors. They’re going to survive and they’re going to thrive in spite of a hurricane. But that doesn’t mean they shouldn’t be acknowledged.”

In New Hanover County, workers at shelters ask for identification, but ID isn’t required to gain admission. During Hurricane Florence, the initial request for identification caused confusion and resulted in about three dozen people staying at Evans’ home, many of whom did not have or did not want to produce ID. Many of those same people lost tarps, tents or personal belongings during last year’s storm.

For instance, Terry Mangum’s spot in a forest was disrupted by trees felled by Florence. The place where he has pitched his tent now, Mangum said, has two trees leaning at precarious angles that could fall in storm-force winds.

“If they don’t, then I’m going to get a chainsaw and take them down myself just in case we get another one,” Mangum said. “There’s two more out there they say, behind this one.”

Mangum added that he was supposed to see his long-estranged daughter for the first time in 18 years this past weekend, but plans were canceled due to the storm’s approach and his need to prepare.

As of Wednesday morning, Mangum was unsure if he would leave his tent to head to a shelter, in part because his 7-year-old dog doesn’t like many people.

“If the winds aren’t all that bad, I’ll just stay out there where I’m at. But then when you see the trees start going six foot one side and six foot to the other side, it’s kind of iffy… Pine trees snap halfway, especially if they are not all that big,” Mangum said.

Randy Evans has provided six meals a week to the city’s unsheltered, including breakfast on Monday, Wednesday and Friday. As people arrived one-by-one or in pairs Wednesday, Evans handed them plastic bags containing some provisions, including almonds, beef jerky sticks, fruit cups and tuna salad.

When one woman told him she needed another package for her husband, Evans said, “Your husband, who’s your husband? When did you get married? … Oh, you mean your boyfriend.”

A block away from where breakfast was served, a crew was placing boards over windows at Front Street Brewery’s storefront. Throughout Wednesday, more boards went up along Front Street in the city’s downtown area.

Beth Schrader, New Hanover County’s chief strategy officer, said if someone doesn’t have identification, the shelter will ask them for their name and an address, recording that information. Personnel then compare that to an updated list of sex offenders in the area.

“We are not requiring IDs and that is not a change,” Schrader said. “We ask for IDs, but we do not require it.”

Schrader also said efforts were still being made Wednesday afternoon to inform people of the anticipated risk from Dorian’s storm surge.

Volunteers with the New Hanover County Disaster Relief Coalition were teaming up with New Hanover County Fire Department personnel Wednesday afternoon to go door-to-door in neighborhoods where flooding was expected, while the county was making reverse 911 calls to at-risk locations.

Evans planned to serve lunch Thursday night and try to convince people to head to a shelter. Then he will hunker down for Dorian before returning to serve dinner Saturday.

“That’ll be kind of my last-ditch effort to get people there,” Evans said.

One thought on “New Hanover County registrants seeking shelter from Hurricane Dorian will be offered a location at the jail. . . away from their family”