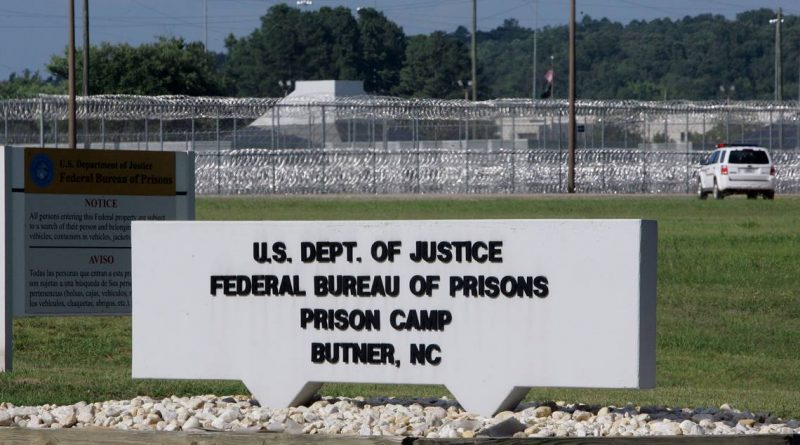 by Dwayne Daughtry (4/09/2020) — Butner Federal Prison has the most COVID-19 cases of any federal prison in the United States, as of the Bureau of Prisons last count on Wednesday.

Officials say at least 42 inmates and one staff member on the medium-security side of the prison have COVID-19. However, Butner is a medical facility that treats the Bureau of Prisons systems. Infections from the prison into hospitals create a precarious situation demonstrating it may not be feasible to reduce the spread of the COVID virus if inmate exposure continues to rise. How will Butner hospital mitigate and prioritize inmates keeping them safe?

There are 15 cases on the minimum security side and at least one confirmed case at the medical center.​​ Those numbers should be a concern to family members of inmates housed at Butner. There have been discussions by reliable media sources that Butner facilities may be overcrowded. To forcibly relocate inmates from one crowded area to another may not be a practical and safer solution.

While the U.S. Attorney General exercised emergency authority under the CARES Act to further increase home confinement, there hasn’t been much data or information to suggest any level of inmates have been released, if any at all?

Butner federal prison is host to famous people such as Bernard Madoff, Samuel Israel, and Gilberto Rodríguez Orejuela.  Some inmates at Butner federal prison are housed due to federal sex offense crimes. However, a majority of those serving prison sentences for sex crimes are low-level non-contact internet-based charges and convictions. Many of Butner’s inmates are serving low-level prison sentences that pose no significant risk to communities.  In today’s world a felony conviction could indicate any crime ranging from embezzlement, voting election fraud, to placing a bomb threat without actually carrying out the act. Prisons haven’t actually rehabilitated the incarcerated. It just made the prison system much more lucrative all while making the inmate population that much poorer.

There is no published data that demonstrates those convicted of sexual offenses or other low-level offenses are a threat to communities or the general public. Most sex offenses or other criminal convictions are plea deal based and prey on a one-time poor decision based on curiosity or other factors, those with mental conditions, or the disenfranchised. Yet, the media and fear-mongering among the general public judges’ others without mercy or redemption continue to ratchet up unfounded hysteria and false rhetoric.

Perhaps prison reforms should begin with prosecution reforms? Only time will tell to remedy our failing prison and criminal justice system.

Families will not be ripped apart in Tennessee